How To Drive in Snow 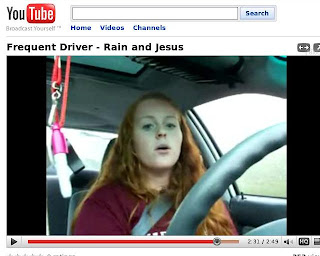 There are lots of YouTube videos to help you drive better, like the one in the picture. I put a 28 second video on YouTube myself a year ago with the title "How to Drive in Snow", which now has over 6000 hits. Obviously the title has attracted some viewers, because some of my other videos like "Walking on the Beach -20 Degrees C." got only 115 in the same amount of time. YouTube has a geographic hit counter, that lets you see when and where most of the hits are from. And it's pretty obvious, comparing that to world weather reports, that every time there is a major blizzard in the USA or Europe, in a place that does not often see snow, I get a spike from that region on "how to drive in snow".

It seems that as people get more familiar with the Internet, they often use it to solve problems. I know I use Google or YouTube when I get stuck at anything from post hole digging to medical symptoms. So I just wonder how useful my 28 second video could be, as it merely suggests that you do not spin your tires if the car is at a standstill. It may be good advice, but it's not really what they want to know, if they are looking at white stuff outside the window for the first time in their lives, and they have a 45 minute commute to work.

Let's say you just woke up, you're inside your house, and there is about 6 inches of heavy wet snow, and this is the first time your area has had a snowfall like this for 25 years. Of course, you have no snow shovel, and no ice scraper, and you were not even born the last time this happened. You car has "all season tires", which are really summer tires, as none of those seasons include winter.

My advice is, first to consider alternate transport. Now that might take care of .0001% of you. Second, look at the weather report on TV. See that guy standing there with the microphone freezing his ass off? Now see the cars behind him, spinning in circles, piled in ditches, stuck in long lines of traffic? That's not special effects done by the graphics department. If you go out there in your car, that's going to be you. You might as well call in sick (or whatever term you can use), or try working from home. If you can Google "how to drive in snow", then you can do some work from home on the computer.

So you're still going to go out? Tip number 4: Dress warm. (including boots, gloves, hat, coat) I know your car has a heater, but after you plow into another car, somebody has to get out to exchange insurance information, and wait for the police, and then wait for the tow truck. It will be cold out there. Even if you can't get out of the car because the door is crushed shut, the engine will likely stop running and then the heater gets cold. If the engine keeps running, and you can still reach the key with your good arm (if you have one), shut it off anyway to avoid starting a fire. Cold is better than burning alive. If you freeze, you may lose your feet, but it takes hours and hours to happen. You are wearing those clothes I said to bring, right? Another tip: Just because it's cold outside doesn't mean a fire can't start.

Tip 5: Take a cell phone or iPhone or whatever you have got. But under no circumstances should you be using it to Google "how to drive in snow" while sliding down the road at 100 kph. Wait until your car has come to a safe stop in a ditch first.

Those are some of my best tips for people who are really new at driving in snow. For more experienced drivers, I would say get winter tires for the winter, as they work well, and they're not like the snow tires from the sixties. And slow down because I don't care how good you are, things can happen. But experienced drivers don't usually Google "How to drive in snow" anyway.

There are plenty of YouTube videos about driving in snow. There is one by "Joe Average" that is obviously a joke. But I just don't know what to think of the the one by a young woman who calls herself "Frequent Driver" (pictured above). I can't tell if it's a satire, but either way, it is kind of funny while also being somewhat serious. She mounts the video camera on the dashboard to show her face then drives while giving tips or complaining about something, such as being ticketed for 25 mph over the speed limit. Also the camera may fall off the dashboard and needs to be picked up while she says "I'm sorry, the camera just fell over". Some of these problems may be unique to women, like guys who see her and then try to drive beside her on the freeway because she looks hot. I actually think Ontario's stunt driving law has a provision that you could lose your licence and vehicle immediately for that!

(Driving in snow and staring)