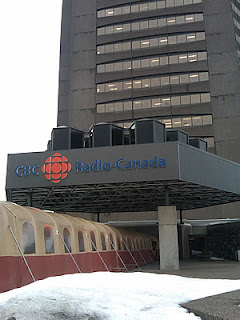 This morning I was jolted right out of bed by a news report on T.V. What happened today, you may ask, that would be so important as to disturb my beauty sleep? This report was on the French language television counterpart of the CBC known as "Radio Canada", about the arrest of 26 people in Manitoba for criminal activity including drug trafficking, illegal weapons, money laundering, and obstruction of justice. Not once during the report did they mention "Biker" or "Biker gang" or "motorcycle". That is the first time in living memory that the Hell's Angels have been in the news with no reference to motorcycles.

The link is here, and includes the video clip that I saw on TV this morning. In case you think maybe there is no word for bike in French, it is "Moto" pronounced like "motto" with accent on the second syllable." Actually a better word than "bike" in English, which can be mistaken for a pedal bike. "Biker" is "Motard", slightly harder to explain, but never mind, it is not mentioned in the clip either. There is also no reference to bikes in the French language written report.

By contrast, the same story by the English language counterparts at the Canadian Broadcasting Corporation, barely 10 words got written before "biker gang" appeared. I didn't find a link to any video, but that's OK because they failed the written test, and that's enough for an overall fail.

It kind of reminds me of when I was a kid, the very first time I became aware of "spin" on TV. Charles Degaulle had landed in Quebec and had uttered his famously provocative (not in a good way) "Vive the Quebec libre". The CBC was doing a news story about the incident, and during their story they declared that the press in Quebec had completely ignored Degaulle's utterance. I had the sudden inspiration to "fact check" although I never heard that term before. It was pretty easy, we had only two channels, CBC and Radio Canada. I flipped the channel and there was the Radio Canada crew doing what appeared to be an hour-long broadcast on the subject of "Vive the Quebec Libre". This opened my eyes to the folly of trusting the media without checking or at least using common sense. Although I will confess to personal lapses during the 42 years that have passed since then.

So let me congratulate Radio Canada on their journalistic integrity, and a world record for a 2 and a half minute segment on Hell's Angels criminal gangs that managed to avoid mentioning bikes and bikers at any time. Something I thought I would never see in my lifetime.

And yet another boo to CBC and probably just about everyone else for continuing to confuse criminal activity and motorcycling. Let's hope all the other news media will follow the Radio Canada example.
Copyright the Lost Motorcyclist