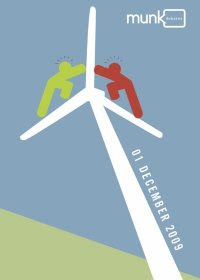 On December 1st, there was a debate about climate change pitting Elizabeth May and George Monbiot against Bjorn Lomborg and Lord Nigel Lawson, at the Munk Centre.

The debate was on this point “Climate change is mankind’s defining crisis, and demands a commensurate international response.”

One of my favourite debating techniques is "Reductio ad absurdam", meaning to take a proposition and show that it leads to an absurd conclusion. I am not a debater in the formal sense, nor do I speak Latin, but this is my attempt to reduce a proposition to absurdity. The proposition is: "Be it resolved that that it is useful to debate climate change publicly". The absurdity is that we need another debate to decide who won the first debate.

Scientific method seems to always be at odds with debating methods. The scientific method has probably led to every technological advance humans have ever made, from fire and agriculture to walking on the moon. But debate has been dominant over scientific methods for a long time.

In this Munk debate, the definition of the win (used by Contrarian) was based on the before and after surveys of the audience, indicating that more people were swayed by the opposition to believe their side. So, May and Monbiot started with 61% on their side and ended the two hour debate with only 53% support. Although it is still more than half, apparently the erosion of support is the key factor. So now we can hold a debate on whether this is a significant trend or not.

Secondly, the original resolution made the whole debate about whether climate change is mankind's defining crisis. If I had the choice of sides, and wanted to win the debate, I would choose the con side against May and Monbiot. Bjorn Lomborg took advantage of the resolution to argue that while climate change was bad, that it would be more efficient to simply feed starving people than to diversify our energy policy. I think that tactic persuaded several people to change their view, especially when you think of poor starving people compared to a warmer climate, and you compare the cost of feeding them to the cost of building wind turbines. I think it's a short sighted way to look at things, but that is the way most people seem to think.

If I was debating, all I would need to do is bring up any other crisis that overshadows climate change. How about this? Since mankind's stupidity is making climate change worse, I would argue that stupidity is mankind's defining crisis. That way I win the debate outright with something everyone can agree on.
Copyright the Lost Motorcyclist