Motorcycling in other Countries: Attitudes 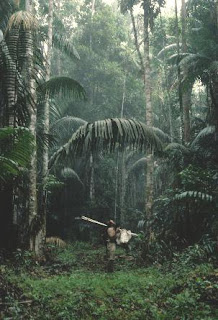 I am re-reading a book by Ed Culberson titled "Obsessions Die Hard" about motorcycling the Pan American Highway's Jungle Gap. Just to explain, the Pan American highway has a notorious gap in it, between Panama and Columbia known as the Darien Gap. Ed's obsession was to not only drive a motorcycle through, on the planned route of the road, but to do it as part of a full length trip on the Pan Am highway that reaches from Alaska to near the tip of South America at Ushuaia. As far as I know, this gap still exists.

I own a copy of this book, which I bought personally from Ed at a BMW rally in North Carolina, USA in 1993. I am now in the process of re-reading the book. Probably the most important difference between Ed and I in our motorcycling is that he is from a military background, which I will characterize as traditional conservative. I am from a more liberal background, and my overseas experience has been as a CUSO volunteer, which is more analogous the the US Peace Corps, rather than the Marine Corps.

When I met Ed we did talk a little about motorcycling at this rally, and I remember specifically he was chiding me for not shaving. Yes, back then I didn't bother shaving when I was on a motorcycle trip. My attitude was that shaving was a waste of time that could be better spent riding. I didn't even carry a razor or an electric shaver with me. But I did consider Ed's words, and thought maybe he did have a point about presenting a cleaner image to others. So a few days later when I reached Florida for the "Sun Your Buns" rally, I went to a barber shop in Venice. I was not really a frequent patron of barber shops, so I didn't know what to expect, but I had seen movies, and I thought it was normal to ask for a haircut and a shave. There was an immediate reaction to this. I was told "No, a shave is impossible". When I inquired innocently why not, I found out that apparently everyone was afraid of catching aids, so barbers were no longer allowed to shave people. Well there went the main reason why I was in the shop in the first place, which again was mainly because of Ed. But I decided since I was there anyway, to go ahead with a hair cut. "How do you you want it?" he said. "Bush, Perot, or Clinton?" Apparently, between these three Presidential candidates, you just about covered 99.9% of hairstyles men asked for in a barber shop in 1993. Check out the pictures. I chose Bush, because I am always middle of the road in everything.

So getting back to Ed and his book, the more I thought about it, the more I noticed that we had a completely different viewpoint not only on motorcycling, but on our view of local inhabitants. One aspect of motorcycling I liked was that local people were more friendly to motorcyclists than they are to car drivers. Each time I approached a military road block in Sierra Leone, somebody always came to meet me and wave me around all the cars that were lined up being searched. To this day I can't explain why that always happened, but it was part of an overall friendlier attitude to motorcycles than to cars. I got the same treatment over and over again in different ways. It's quite different in the USA where bikers are seen as more threatening than car drivers. I got the feeling in Africa of being trusted more because I was on a bike, and it also fit in with my CUSO philosophy that I tried to respect local culture, and I was in Sierra Leone trying to help the people. Ed, from a military intelligence background, instead used his motorcycle as a cover for his intelligence gathering operations. He had noticed the same attitude that I did, and took advantage of it. I saw that as being not only an opposite attitude, but that Ed was actually undermining the trust people had for motorcyclists. These days we have kidnappings of health workers and so on in various countries, with the pretext that they could be spies. Well, if real spies are using motorcycles for cover, I suppose that could be true.

From reading his book, Ed also seemed to have a suspicious attitude toward locals. For example, he writes that he got offered a boat ride to a place he needed to go. When he asked "How much?" he was told, no charge, just pay for the gas. I would call that a friendly offer and would say thanks. But Ed wrote that he thought it was a scam, because the boat owner also insisted once the trip started, that he needed more gas to return to his home. Which again to my unsuspicious mind would be fair, as the guy has to get home. Then Ed complained that the gas was 4 dollars a gallon. Well, again, he is in a place with no roads in or out. Anyhow, I was just reading this in the book, and I didn't get a chance to ask Ed about it or I might have mentioned that gas even in the UK is four times the price of the USA. But once again, I think Ed and I had different attitudes, could it be military vs. liberal? Because for sure it was all about appearances vs. sincerity, if you consider the spying and the shaving.

Nowhere is it more obvious, though than in the task Ed took on for himself of carving a path through the Darien Gap. Although I sometimes got off the beaten path myself in Sierra Leone, I never took on this kind of "conquest" you might call it. One time I went into a military restricted area with a letter of permission from my school principal. On other adventures I found back roads that hardly anybody knew about, that were great shortcuts for getting around the country. One place I crossed a small river that had no bridge. And that was about it. I suppose some CUSO volunteers were more adventuresome than I on motorcycles. But Ed was taking on a life threatening 100 mile trip where the motorcycle had to be carried as much as driven. That is starting to resemble a military campaign more than a ride in the park.

I read this part again with greater interest than last time:


"some observers claim that the myth of the Darien may have been transformed into something more sinister - the Curse of the Darien."

Then Ed gives many examples of people who challenged the Darien and died, mysteriously or not. He writes further:


"These stories did not overly concern me in 1985 as I was preparing to make my first attempt at the gap. Not being superstitious, I did not really care whether the myth had been destroyed or transformed into some sort of curse, or even if it existed at all. I could not afford to worry over vague tales of how Darien Gappers had struck down in retribution for their trespassing."

Here at least, about superstition, Ed and I are in agreement. However two years after I met him, four years after he printed the book with those words, Ed Culberson died of ALS.
Copyright the Lost Motorcyclist