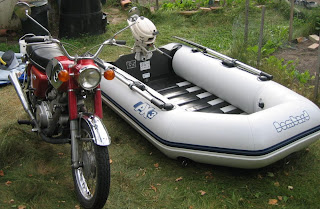 One of the fun parts of motorcycling for me is to sometimes get off the beaten track, to go where cars can't go. There have been times I have done that, but in reality they are few and far between.

The route I take most often that a car could not go is not in the wilds of the Amazon rain forest, it is the route into my garage. To get into the garage, I must drive my motorcycle between the house and the car on a driveway so narrow that I often rub the saddlebags if the car has not been left in exactly the right spot. This situation comes up so often, for obvious reasons that I almost put it out of my mind. But when I think about buying a sidecar, I realize that I would also need to move to a new house.

A motorcycle can obviously park in a space much smaller than a car. But car drivers are an easily annoyed lot, and if you try to make use of a space that a car cannot fit into, they will find a way to make it illegal and ticket you. So very often, I must use up a full size parking space for just my motorcycle, when I would be inclined to be considerate, use a small spot, and let a car driver park in the regular spot. Strangely, car drivers never seem to get upset about a motorcycle taking a car spot, so I just go with the psychology, whether it makes sense or not.

Motorcycles have an advantage in taking taking ferries, in that the the crew can (and will) usually stick a motorcycle in a spot too irregular for a car. So it's normal for ferries to allow motorcycles to the front of the queue waiting to board. But I notice this practice is not universal any more, and I think that there have been arguments in the past with motorcyclists that did not understand that a motorcycle/sidecar pulling a camping trailer takes more space on the ferry than a Toyota Matrix. So it's easier in some cases for the ferry company to make everybody line up, no one goes to the front unless on a bicycle or on foot. If it was me, I would simply make a rule about overall size and never mind anything else, but it isn't me.

Now what about going off road? Most of the time, around southern Ontario, off road driving is illegal. When I lived in Northern Quebec the forest was generally impassible - the terrain was too rugged (cliffs etc) and the forest was impenetrable. Even on foot the best way to walk through an uncut forest would be to walk on the criss-crossed fallen trees. The undergrowth is usually a solid interlocking wall of branches. Apparently you can go off road in certain desert areas of the southwestern USA, but that's a long way from here.

There are also logging (or service roads) roads. If they are maintained, then you have two problems: deep gravel and the logging trucks. If they are not maintained, you may travel some distance and then find a certain part of the road impassable. In either case, you also have to consider whether you would be even allowed on the road.

When I was in Africa, there was one place I went that I had to cross a fair sized creek about 15 meters across by 20 cm. deep, with big round rocks on the bottom. I never did fall over, and it was great having a fairly light Honda CD175, so even if it did go down I could pick it up and drag it to shore (I so I imagined) If the river was too big, having a small bike allowed it to fit easily on a dugout canoe or small raft, another place a car couldn't go.

Over the years I have given some thought to many problems of where a motorcycle can go and can't go. Every time I did a lot of work customising the bike to go somewhere, some dealbreaker always came up at the very end of the process, often stranding me where I didn't want to be.

Recently I have taken to working out these problems on paper, as that is cheaper and less hazardous to my health.

In the picture, I show my Honda CD175 and my small inflatable outboard. I know theoretically the Honda fits in the boat (diagonally), and the boat is rated to carry the weight of the bike plus rider. I know that the Honda can carry the weight of the boat plus the 35 pound outboard motor, although it would make a heck of a big pile of stuff on the back seat. But I also know that there are a million pitfalls to this plan. I have a feeling that if I was younger (i.e. a lot crazier) I might actually try it.
Copyright the Lost Motorcyclist