I Am So Busy 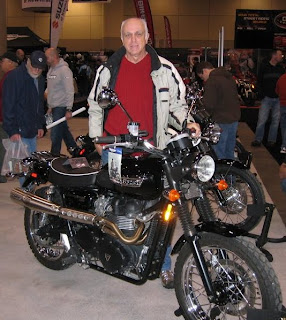 There was an unusual amount of activity this week. Our first snowfall was big enough to need shovelling at least three times. On December 11 was International Human Rights day, so Mary Ann and I went to a talk at the Centre for International Governance Innovation (CIGI) in Waterloo to listen to a talk by Alex Neve, Secretary General of Amnesty International Canada.

Friday was the start of the Toronto Motorcycle Show, which I attended with some friends. I posted pictures on Picasa Here.

I didn't get a picture of the Suzuki C50T, which is the most direct competitor to the Kawasaki Vulcan 900 LT. But I did sit on it a minute. I can't see everything in that amount of time, but I did notice the Suzuki had a smaller windshield, shaft drive (instead of belt), rear drum (not disk). I liked the more padded feel of the Suzuki seat, and the suspension seemed to have more give. But of course that's without riding it. I did like the way the C50 saddlebags closed, with an easy single turn pin instead of two "quick release" plastic catches. I find it a bit tricky and slow to close the bags on the Vulcan. I liked the passenger backrest better on the Suzuki instead of the Vulcan's chopper-like sissy bar. Although they probably work about the same. I don't know how the prices compare, or the long distance comfort or power, sound, reliability etc. But I imagine they are so close in almost every way that it would be hard to make a decision. I do kind of envy the softer rear spring and the easy close saddlebags. But it's going to be a while before I am tempted to replace the Vulcan, and by then many other bike models will have come and gone.

I think that Kawasaki Motors makes a conscious decision to position themselves to the "hard edged" side of the spectrum, while Suzuki seems content to be seen as the softer "more comfortable" motorcycle company. I know there are some really hard Suzuki bikes like the GSX-R 1100 etc. But on the other hand, Kawasaki does not make the Burgman scooters, and has a reputation for dangerous bikes going back many years. So on the average, I think Kawasaki has the tougher image. Which shows up in the Vulcan 900 as a sissy bar, rear disk, open belt drive, rear disk brake, and thinner seat padding. Suzuki would like to get a tougher image, but it takes time and sacrifice to get turned around. Suzuki and Kawasaki even tried to partner up a few years ago, but it didn't work out. I wonder what their arguments were about?

I have reorganized my blog, by putting in labels which I didn't know how to do properly before. I used to just put a bunch of key words, but the correct way is to separate all the words with commas. So I updated all 280 or so blogs, and now the labels function allows you to click on "motorcycling", for example, and be spared any controversial references to religion or politics. Not so controversial if you are anywhere from agnostic to atheistic, very controversial if you believe in Adam and Eve, or George W. Bush. So for anyone who wants to leave a comments on religious blogs, simply click on "religion" instead of "motorcycling" to see them all without any distractions.
Copyright the Lost Motorcyclist