Economics 101: The House of Cards 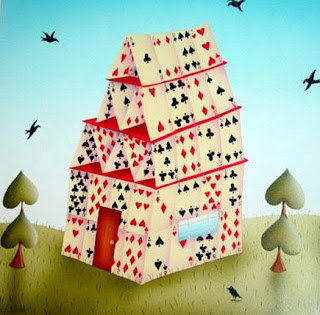 To make sense of economics on a national level, you must first recognize that national economics are not like personal economics. Just because somebody is able to balance their checkbook and pay their utility bills on time does not qualify them to advise the government on economic matters. Especially if those people spend time praying to Jesus to win the lottery. So let's not listen to people who claim that because they have "common sense", that they can tell you what's wrong with the government policies.

On the other hand, it should not be impossible for the average person to understand some of what is going on with the economy nationally. Let's start with money. For an average person, money = wealth. For a country that prints its own money, money does not  equal wealth, because the government is not limited in how much money it prints.  For a sovereign country with its own currency, there are other more meaningful measure of national wealth.

One other difference between national economics and personal economics is the theory of probability. On a personal level, you can decide what day to buy a car, or buy a house, or quit a job. But on a national level, the economy is made up of millions of people making those decisions, and the government tries to control the probability of the decisions through taxation, or interest rates. The reason the government tries to control the probability (or even things out), is because it will never do to have nobody buy a car for three years (for example) then all of a sudden everybody wants one on the same day. The average person is accustomed to being able to go without buying a car for three years, but that only works because other people are buying cars at different times to keep the factory in business. In national economics it's important to understand this concept of probability. Or at least know that it exists.

The reason I brought up the concept of probability now, is that people actually used to understand this much better. It was well known back in the thirties that if everybody tried to take their money out of a bank at the same time, and nobody was putting money in, the bank would collapse. Many banks collapsed for exactly this reason. Since then, the government made rules, and set up institutions, to stop this from happening. The unfortunate side effect is that so many people today have no clue that it could ever happen. And so there is no understanding of the rules or the institutions that keep it from happening.

Just last month, we has a "crisis" with H1N1 flu shots. Why? because on Friday, nobody wanted to get their shots. Saturday a little boy died of H1N1 playing a hockey game. Monday, everybody in Canada wanted their shot on the same day. The fact that there were long lines was not a failure of the government, it was simply a failure of random probability at vaccination centres. I was quite amazed to see that nobody on TV at least, understood this in their commentaries.

We have definitely entered an age where not only are people increasingly ignorant of how things work, including the laws of probability, but they are also ever more vocal in their complaints about how things are getting done. An example of this was the attempted ouster of Stephen Harper last year, that many people misinterpreted as a "coup d'etat" but it was actually part of parliamentary tradition dating back to when Canada was born.

One of the problems with a Free Market Capitalist economy is that it is prone to periodic booms and busts. This the opposite of a communist planned economy. While most people understand that in a free market economy, prices tend to be set by "the invisible hand of the market", they do not understand that, if left alone, this would result in wild swings of prices that would eventually crash the economy. So some fiddling under the table is required to keep things stabilized.

Back in the depression, it was discovered that the government could actually help get the economy going by boosting its spending at a time when all privately owned companies were cutting back. This theory has been tested again and again. Strangely it is still not without controversy, free market extremists believe that Governments should do nothing to interfere with the "invisible hand" of the market. And for some reason you hear a lot of their discredited opinions on TV.

In this controversy, I believe in government intervention, as do almost all serious economists. I see it this way. The government acts kind of like any other business in the economy except that it is much bigger. So when every other business is slashing its costs and laying off people, the government can go ahead and boost its spending to even things out. Of course it's not as simple as that, but you can see how, if the government did the same as everyone else in a recession, you would have your classic panic situation similar to a run on a bank.

One more supposedly common sense idea that needs to be explained. These days, it is common to hear people proclaim that taxes are theft. That is nonsense. Taxes are not theft. Taxes are the price you pay to live in a country that provides services that you use every day, even though many of them you may be unaware of. Police, fire departments, the army, the schools, the justice system, the roads, the safety of food you are served in restaurants. As we learned in Ontario a few years ago, even the purity of the drinking water is assured by the government. We tried to cheap out and people died. Then everybody lost confidence in our drinking water and a new industry sprang up to sell bottled water that was no better than free drinking water but cost a thousand times more. Then our garbage dumps started filling up with empty water bottles, and finally we are starting to go back to drinking water from a tap. All that nonsense and waste, just because our "common sense" conservative government thought it made no sense to check the drinking water.

No matter what you might hear, taxes are a price you pay for living in this country. The only theft that happens is when you cheat and don't pay. And its about time we got some real experts on TV explaining our recession. It may be harder to understand, but there's no excuse for the nonsense that people are being fed daily about economics.
Copyright the Lost Motorcyclist