What Kind of Motorcycle Does God Ride? 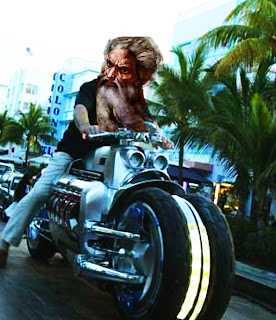 This is such a great combination of topics, I can't believe I have not already written about it (Actually I have). This morning I came across two book titles (which I have not ordered yet):

God Rides a Yamaha: Musings on Pain, Poetry and Pop-Culture by Kathy Shaidle

God on a Harley by Joan Brady

And while I'm on the subject of motorcycling and religion, how about my favourite

Zen And The Art Of Motorcycle Maintenance by Robert M Pirsig

The last book is a bit off topic of course, since it does not attempt to answer the question of what kind of motorcycle God would ride. Though it is still about religion and motorcycling.

So, would God ride a Yamaha, or a Harley-Davidson, or something else altogether, or no motorcycle at all? This time, I'm not just asking the question, I seriously want an answer.

Obviously God does not need to ride a Harley for transportation, as He is ubiquitous (I actually learned that word in religion class, meaning He is everywhere at the same time). So God would probably ride a Harley for the same reason every other guy rides a Harley. I mean for the image, not picking up chicks. God does not need to pick up chicks in the human male sense, but He does want their religious love. That's where the Harley can come in handy, because I happen to know many women are quite fond of a man (or anything in the form of a man e.g God) who rides a Harley Davidson as opposed to other types of motorcycle.

You may wonder, why would God need the Harley to get friends at all, as He is all powerful. There is one and only one place where God does not exert His power, that is in a human being's free will. In other words, God can do anything else in the universe, but He will not attempt to change your mind about Him. That is up to your free will, where you may accept Him or reject Him. Knowing that, we can see where the Harley might come in handy, to persuade someone who likes bikes to form a bond with the supreme creator. After all, God wants to save us. He just will not use supernatural power to influence our will. But a Harley's attraction is all natural.

Why not a Yamaha? So far I have focused on the Harley-Davidson, because it is after all made in a country founded on Jesus, while the Yamaha comes from Japan where I assume some other religion holds sway. Actually I just looked it up, and the top religions are Shintō and Buddhism. Zen is not a religion all by itself, it is a form of Buddhism. Funny thing about Japanese and their religions, if you added up all the people who are Buddhists, plus all the Shintoists, you would find that the total is about 50% more than the entire population of Japan. That's because Japanese people don't take chances, and adopt a form of practice known as syncretism, or what we might call redundant affiliations. As far as I can tell, there is one proven advantage of syncretism, it prevents Buddhists from slaughtering Shintoists and vice versa, as they are one and the same people.

So enough of Japanese religions, getting back to whether God would ride a Yamaha, or any other Japanese motorcycle for that matter. (I will get to Chinese motorcycles later, as that is a whole other matter). First God does not have to worry about money, for obvious reasons. (Hint: He is God). So unlike most Americans and Canadians, who may buy cheaper Japanese bikes, God is not constrained by a budget or by the loans officer. And without the money worries, God is free to choose a bike that will enhance his image, rather than spare His wallet.

That's pretty much settled the Japanese question, (answer: No). European bikes also have a Christian tradition. So it's a fair enough question to ask, why not a European bike, say a Triumph or a BMW or even a Moto Guzzi. Although Urals are technically European - just barely - they are made in Russia which has 70 years of Godless Communism to answer for first. And this applies to mainland Chinese bikes too.

There is also the question of other American makes such as Indian or Victory motorcycles. Or even that monstrosity the Boss Hoss V8.

When questions get complicated like this, remember that God is far more intelligent than we are. We can never know His mysterious ways. But since God actually designed the entire universe, He could obviously make a custom bike any way He wanted with all the accessories. So I think that God might ride a one-off custom bike.

Picture: I photoshopped God's head as seen in the Sistine Chapel, onto a picture of a Dodge Tomahawk V-10 concept bike.