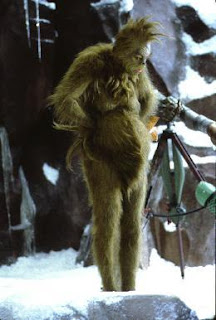 Nothing like some good old xenophobic humbug to get me in the mood for Christmas. And of course by saying "Christ"mas I do not mean to start a fight about which religions are excluded etc. I just mean a multicultural Christmas in the true sense that Jesus might have expressed "Love your neighbours", nothing else. Whew, hope I dodged that Fox News artificial controversy for now at least.

From Mark Steyn on multiculturalism and its application to Christmas concerts:

"Take multiculturalism. The great thing about multiculturalism is that it doesn't involve knowing anything about other cultures–the capital of Bhutan, the principal exports of Malawi, who cares? All it requires is feeling good about other cultures. It’s fundamentally a fraud, and I would argue was subliminally accepted on that basis. Most adherents to the idea that all cultures are equal don’t want to live in anything but an advanced Western society. Multiculturalism means your kid has to learn some wretched native dirge for the school holiday concert instead of getting to sing “Rudolph the Red-Nosed Reindeer” or that your holistic masseuse uses techniques developed from Native American spirituality, but not that you or anyone you care about should have to live in an African or Native American society. It’s a quintessential piece of progressive humbug."

This piece of writing is missing the spirit of Christmas so let's see if I can turn it around in time for Santa to come down our chimney again.

"Multiculturalism means your kid has to learn some wretched native dirge for the school holiday concert instead of getting to sing “Rudolph the Red-Nosed Reindeer”.

My grandkids, actually. Eight year old Emily has no problem singing some "wretched dirge" about Hanukkah, and some other little Muslim girls sing happily right along with her while their parents proudly pop flashbulbs in the audience. By the way, they also sing "Rudolf the Red Nosed Reindeer", only the Grinch himself would think one excludes the other. And this year, anyway nobody "has to" do anything. My grandson opted out of the performance and observed the goings on while sitting in the audience with his Mom and Dad, but most kids still wanted to be in the concert. Mark really should attend the next Christmas concert at Abraham Erb Public School, and just watch his grinchy heart grow three sizes this year.

Another of his statements:

Santa says let's stay away from the argument about which race is equal or superior to what race or culture. Can everyone agree on that? Or do you want to get on the naughty list?

Do all people want to live in an advanced western society? Yes, and to be more specific, probably Canada. Canada is the closest country to the North Pole, and it makes it easy for Santa to deliver all those presents. And another reason to live in Canada? Because of multiculturalism, and the working model that Canada has provided.

"Not that you should have to live in an African or Native American society".

Maybe not everybody wants to, but I have lived in an African society, and it was not the horrible thing Mark imagines. We even had a pretty nice Christmas. But why does he even bring up the point except to scare people and make them think that to be truly multicultural, you need to live in a mud hut or tepee with no running water and no chimney for Santa?

"[Multiculturalism] is fundamentally a fraud, and I would argue was subliminally accepted on that basis. It’s a quintessential piece of progressive humbug."

Multiculturalism is not humbug, and unlike xenophobia, it's good feelings are very much in the true spirit of Christmas. So merry Christmas to all.
Copyright the Lost Motorcyclist