The Connection Between Justice and Education 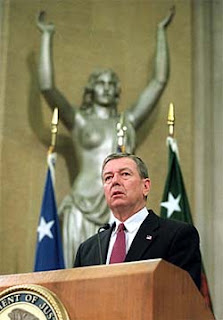 Last night, Jay Leno had Glenn Beck on his program. Glenn is the fastest rising star in the constellation of right wing opinion makers. The conservatives need a new guiding light after losing the election. It seems that since Obama became president, they now identify better with Beck than with bullying self assured right wingers like Limbaugh, Hannity and OReilly. Glenn, on the other hand, is a persecuted wimp who had all his lunch money stolen by mean Democrats. At latest count, apparently 45 trillion dollars worth. So no wonder the Republicans now flock to him for comfort.

Glenn, like his earlier role models, has pride in not being overly educated. He proclaimed that he was the first in his family to go to college, but only stayed a couple of months. And furthermore that very lack of education is what makes him more qualified than Barack Obama to decide what level of national debt is best for the USA. As he says "You don't need a Harvard education to know that a debt of 45 trillion dollars is unsustainable."

Jay at one point tried to interject a little of his own "common sense", saying in effect, what's wrong with being smart and going to college? Wouldn't that make you even better prepared to run the economy? Glenn explained, no, the founding fathers of our nation placed more trust in a simple farmer than in an educated elite. Apparently Thomas Jefferson said he would rather be tried by a jury of farmers than a jury of intellectuals.

Jay Leno tried to counter with the argument that managing the economy was more like brain surgery than jury duty, so wouldn't you want to have somebody doing it with some knowledge? But Glenn would have none of Jay's trickery.

Well in my opinion, Jay was right. The fact is that a jury does not have to be highly educated, because they are not expected to discover clues, know the law, understand science, or math or even money. That's what the judge and lawyers and expert witnesses do. The jury is there to add impartiality and honesty, and to let ordinary people participate in the justice system. Everything is explained to them and they simply give their decision yes or no.

On the other hand, deciding what level of debt is sustainable in a given economy means you need to have a rudimentary knowledge of math at least, that goes beyond just knowing that 45 trillion is an awesomely ginormous number. You must also understand how big the economy is. And you need to be able to divide one into the other to know what a sustainable level of debt is. This last question might mean a study of economic history and the study of economies of different countries. And of course the knowledge of what to invest the money in so that it helps the country in the future and is not wasted. Glenn Beck thinks that with 2 months of college, most likely drunk or hung over for most of it, he is better to judge this than people educated at Harvard. And by the same logic, the country might be better off getting rid of all institutions of higher education. Of course we would keep all the Bible colleges so we can study how dinosaurs lived with Adam and Eve.

I am not saying you absolutely need an higher education to know what's going on in the world. But we do need some people like that, and we need to pay more attention to what they say. Unfortunately, Glenn Beck and most other right wing opinion makers are either light on education or pretend to be, which is about the same thing. Even more disturbing is that they are also missing what is possibly the most important quality of common sense, which is an open mind. Most of these right wing opinion givers would not even be fit for jury duty.

Picture: Honestly I was looking for a picture of a jury when I came across this picture of Ashcroft looking nervous in front of the statue of "Lady Justice". I remember the story that the Christian Fundamentalists had a problem with the statue a few years back, and not only because it is French, but what if a baby might see it? Anyway, too funny to not use, but not funny enough to do a whole blog on it.