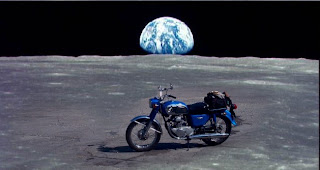 Global Warming, or as I sometimes call it "Extended Motorcycle Season", or alternate title "Shortening the Motorcycle Trip to the Beach" is back in the headlines. Now Mark Steyn and Sarah Palin are weighing in on the topic again.

Here are some comments by Sarah Palin, ex-Governor of Alaska on Facebook (I sure hope it's not a spoof site, it's so hard to tell though).

and on the same page Sarah asserts

"I’ve never denied the reality of climate change; in fact, I was the first governor to create a subcabinet position to deal specifically with the issue. I saw the impact of changing weather patterns firsthand while serving as governor of our only Arctic state. But while we recognize the effects of changing water levels, erosion patterns, and glacial ice melt, .... "

I wonder if she sees that there is an inconsistency in her position. She accuses the scientists of "Hiding the decline of temperatures", but acknowledges the reality of climate change with glacial ice melt. Doesn't glacial ice melt suggest there is actually no need to hide a "decline in global temperatures"? I'm a little disappointed Sarah does not also admit the water is rising (not just "changing"), and that she neglects to mention the disappearing Arctic sea ice, which is close to Alaska, but then I shouldn't expect too much from Sarah.

So we all agree that global temperatures are warming, but the scientists are being accused of trying to "hide the decline" of something. Exactly what was supposedly declining is not mentioned, but all the critics assure us it is referring to a decline in global temperatures. I don't get it. What decline is there to hide if everyone already agrees the the temperatures are actually going up?

Now here is a paragraph from Mark Steyn. Mark is not a climatologist, and never claimed to be one. Mark's main interests these days are free speech and Muslim procreation levels. But he can take time out to harangue scientists who are looking at climate change data, based on some of their emails from ten years ago that were stolen and then made public. I'll tell you one thing, I would pay good money if I could get my hands on all Mark Steyn's personal emails for the last ten years. But that sadly did not happen, I guess the scientists had better things to do.

So this gives Mark the opening he needs to have a go at them:

"The trouble with outsourcing your marbles to the peer-reviewed set is that, if you take away one single thing from the leaked documents, it's that the global warm-mongers have wholly corrupted the "peer-review" process. When it comes to promoting the impending ecopalypse, the Climate Research Unit is the nerve-center of the operation. The "science" of the CRU dominates the "science" behind the UN IPCC, which dominates the "science" behind the Congressional cap-&-trade boondoggle, the upcoming Copenhagen shakindownen of the developed world, and the now routine phenomenon of leaders of advanced, prosperous societies talking like gibbering madmen escaped from the padded cell, whether it's President Obama promising to end the rise of the oceans or the Prince of Wales saying we only have 96 months left to save the planet. But don't worry, it's all "peer-reviewed"."

Mark starts off with the accusation that I have outsourced my marbles to the "Peer reviewed set". Well to be fair, not just me, but anyone who has a tendency to believe the climate scientists over the opinion writers.

In response to Mark, I will say that I would rather outsource my marbles to somebody with an education, who is working on the climate change issue, than to a popular writer whose appeal is based on mindless fearmongering, and insults. Wait, I forgot to mention that I have not "outsourced my marbles". That's why I can still think for myself, and why I can figure out in other ways (not just me, but even the likes of Sarah Palin and George W. Bush) that global warming is not a hoax. Although I'm almost tempted to outsource my marbles to Mark Steyn after reading the soaring prose of "gibbering madmen escaped from the padded cell".

Picture is my photoshop of my Honda CD175 on the moon, parked where it is safe from climate change. Here is a link to some information on the stolen emails that provides far more insight than Mark Steyn, Sarah Palin or Fox News.