Not all Crazies are on the Right 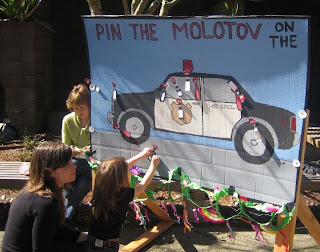 In case anyone ever wondered why all the nut jobs are the right. It is simply not true. There are the equivalent extremists on the left, and webpages full of pictures to prove it. I believe all these pictures are genuine. Some of the protesters are a liability to the progressive movement. For example the nude guy who has a "Reelect Gore" written across his bare butt is particularly unappealing. (hence picture not shown, but link is provided) I assume no Republican would do that, no matter how crazed and zombielike they might be.

It would be great if the liberals would do their part to contain this craziness. But I'm not going to go all the way to San Francisco to drag them down out of the trees, because (1) I don't have a passport, and (B) I'm afraid of heights. It's hard to eliminate all the nutcases and fruitcakes, but we should at least try to contain them so they do as little harm as possible.

There are ways to stop the extremists from gaining too much influence, such as preventing them from


We should not attend their nudist protests, not give them money, and if we take their leaflets (out of politeness), we should not read them, in case we too become brainless zombies and lib-bots.

I don't want to stifle freedom entirely, so I say let them stay up in the tree if they want to, and ride around naked on bicycles, and inflate their scrotums to enormous sizes (as in picture 6).