What Do Canadians Really Believe? 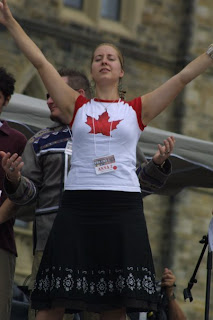 Thursday, December 10 was International Human Rights Day. I attended a talk by Alex Neve, Executive Director of Amnesty International Canada, about Canada's International Image in Human Rights. Just the day before, I had read a new Canadian poll "What Canadians Really Believe", in MacLean's magazine:

"Support for the death penalty has jumped six points in two years to 53 per cent. The result is that more people (41 per cent) consider it morally wrong to conduct medical tests on animals than the diminishing 34 per cent who oppose capital punishment. (The remaining 13 per cent are undecided on the death penalty.)"

In Alex Neve's talk, the subject of the death penalty came up as one of the issues that Amnesty International Canada had worked to abolish. The abolition of the death penalty in Canada was gradual from about 1963 to 1998, nobody has been executed since December 11, 1962.

I got a chance to ask Alex about the MacLean's poll. Although the question surprised him, as he had not read the magazine, his impression was that his hate mail in favour of the death penalty was currently quite low.
Today I did a little more research, and came up with some more surprises.

I discovered that 53 percent is lower than usual for a poll of this type. In June 1995, 69% of Canadians moderately or strongly favoured the return of the death penalty. In February of 1987, popular support for reintroduction stood at 73%. Apparently, in polls at least, most Canadians still tend to favour the death penalty, but support for the death penalty usually drops when there has been a recent case debated in the media.

During his presentation, Alex Neve also told a story that kind of reinforces my impression of Canada's reputation abroad. Back in 2001 Alex went to a Sierra Leonean refugee camp located in Guinea. He wanted to interview refugees to find out what was going on inside Sierra Leone, where there was a war raging. People were reluctant to talk at first, until he introduced himself as being Canadian. At that point, an old man came forward, and announced to the rest gathered around, that this would be OK, because he knew that Canada was a country of Human Rights.

When I was in Sierra Leone in 1970, very few had ever heard of Canada, or had much of an opinion on it. And as far as I know, Canada has had very little presence in Sierra Leone, other than CUSO.

At the end of the talk Mary Ann asked Alex when he felt that the Canadian Government had started backing off on Human Rights issues. Alex admitted that things had gone downhill in the last three or four years. After all, the title of the talk was "Canada and the International Protection of Human Rights: Still a Leader?". He said that Canada's obstructionism had now become constant and consistent, but the reasons for this new stance were still unclear. He diplomatically reminded us that no one party has consistently opposed human rights. Liberals at times had also been opposed to some of Amnesty International's initiatives, and the Progressive Conservatives under Brian Mulroney had done much to enhance Canada's image overseas in human rights during the eighties.


Here is what I found in wikipedia.

"Mulroney's government actively opposed the apartheid regime in South Africa. Mulroney met with many opposition leaders throughout his ministry. His position put him at odds with the American and British governments, but also won him respect elsewhere. Also, external affairs minister Joe Clark was the first foreign affairs minister to land in previously isolated Ethiopia to lead the Western response to the 1984–1985 famine in Ethiopia; Clark landed in Addis Ababa so quickly he had not even seen the initial CBC report that had created the initial and strong public reaction. Canada's response was overwhelming and led the US and Britain to follow suit almost immediately — an unprecedented situation in foreign affairs at that time, since Ethiopia had a Marxist regime and had previously been isolated by Western governments.

The government took a strong stand against the U.S. intervention in Nicaragua under Reagan, and accepted refugees from El Salvador, Guatemala, and other countries with regimes supported directly by the Reagan administration."

While many Canadians associate the name Brian Mulroney with scandal, internationally, he improved Canada's image.

Right here I'm going to get side tracked a little from Alex's talk, but it still has to do with "What Canadians Really Believe", because it's what I really believe.

During the election campaigns, Brian Mulroney famously called himself "The boy from Baie Comeau", coincidentally also my home town. I never met Brian, as he was ten years older than me, and left town to attend an English speaking Catholic high school in New Brunswick. There wasn't one at the time in Baie Comeau. I was also Catholic, but my mother decided a better option was for me to simply attend the English Protestant school in Baie Comeau. This was a bold move on her part, as I think I was the first Catholic to attend Baie Comeau High School.

In about 1972 or so, Baie Comeau High School became the first Protestant School in Quebec to merge with a Catholic High school, in defiance of the strict religious separation that was still law in Quebec (Quebec had two ministers of education, one Protestant, one Catholic). I returned as a teacher to the recently merged school from 1976 to 1979. During that time the battle about religious integration was still being waged, with Baie Comeau doggedly holding on despite an onslaught of bureaucratic red tape. One of the heroes of the struggle was an unassuming secretary, who loved taking care of all the red tape herself by "gaming the system". By 1996, the rest of Quebec followed suit and all religious distinctions have been dropped in government schools, although they are still divided between French and English.

So if Brian Mulroney was growing up in Baie Comeau today, he would be able to live with his family and attend an English school. (but not a Catholic one).

Picture: I took it off this blog, A combination of Canadian and Christian, possibly in front of our parliament buildings?
Copyright the Lost Motorcyclist