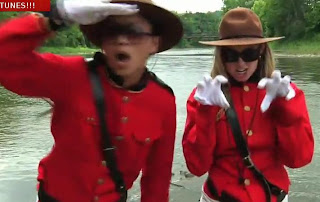 Our leader, Prime Minister Stephen Harper is currently visiting China, sucking up to the Chinese before the Vancouver Winter Olympics. Apparently Stephen was very bad in boycotting the Beijing Olympics last summer, and really not planning ahead as he apparently didn't realize that Canada had some Olympics of it's own coming up.

So as a result of Stephen's new found humility in China, the Chinese have taken Canada off the "list of places it is not recommended to visit".

What is especially neat is that by visiting Canada, (or at least getting out of China), the Chinese tourists will finally be able to view my blocked Youtube video "how to drive in snow" And just in time, too!

Now that Canada is once again a recommended place for Chinese tourists to visit, a little national pride is called for. These two videos should do it.

This game is based on the premise that the dumbest Canadian in the audience can stump the smartest American. First they pick their contestants. Then they run through four questions, during which time they also deduct a point from the American for (a) cheating (b) insulting Canada.

OK it's just humour. Everybody is just having fun.


Next is a new Canadian music video "Canadian, Please"

"I know that you wanna be Canadian

Step 1 Lose the Gun
Step 2 Buy a canoe
Step 3 Live multiculturally
Step 4 You're ready, there is no more"
Copyright the Lost Motorcyclist