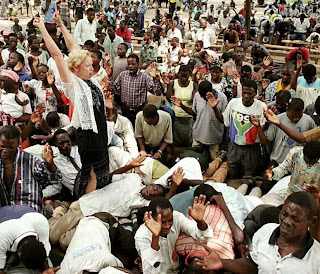 I have written quite a few blogs about religion. And although I do not necessarily believe in the type of God that some Christian fundamentalists worship, that is not the real reason I write about the subject. I think there are several harmful "mistakes" that fundamentalist missionaries make. Some of these are based on a world view that is just inappropriate for a small planet such as ours, where people can travel all over the world in a day, and we must find a way for all seven billion of us to live in peace and mutual respect. If it was only a tiny number of people, I would let it go, but it's a big movement and the extremists seem to be gaining more influence over religion. Another annoyance is the misguided attempt of missionaries, who hold back real progress in peace, human rights and justice, even as they set up orphanages for starving babies.

If your priority is not to make the world a better place, but first of all convert people to the Evangelical Church, then you should take an honest look at the mistakes of the church. As far as I am concerned, some mistakes are inevitable. No person or organization is perfect. Even AL Quaida is not perfect, and everyone knows Hitler made some mistakes. Mistakes can only be corrected if you admit to them first.

Mistakes made by the extremist Christian churches, as I see it:

- An old one, supposedly long gone was support for slavery. It was an acknowledged mistake. It's over and apologised for I guess. But there are still lingering sub-mistakes today that can be traced back to slave owning times. I will mark other mistakes with an (*) if there is a strong connection between this mistake and the legacy of slavery.

- Support for the Republican Party is an ongoing mistake. You may say all politics is dirty, but when you are supposed to be a Christian church, it is a mistake to get into politics for that very reason, no matter which side you are on. And even more so to be a Christian church on the side against peace and against sharing wealth with the poor.(*)

- Promoting unverified faith healing is a mistake. Faith healing attracts greedy con artists and charlatans who use the name of Jesus to give themselves credibility.

-It is also a mistake to call the healing practices of primitive civilizations "the work of Satan". That is a mistake that comes from the slave days, as that is exactly what the slave owners said to their slaves about African healing practices and culture.(*) Just by way of further explanation, faith healing among African tribes is mostly trickery or just unverified rumours, there is no real Voodoo magic that has ever been scientifically observed. And as a follow up, in Africa many children have been accused of witchcraft and burned and mutilated by newly converted Christian "born agains". This perversion has got to be stopped.

- Denying science, especially global warming and evolution, is a mistake, and hurts the credibility of the church.

- Running down public education. Of course this really started with the forced school integration and the civil rights movement. (*)

- Supporting Pat Robertson. Pat Robertson made a "mistake" calling for the assassination of Hugo Chavez. Pat made a mistake buying airplanes for his missionary work that were later used almost exclusively for mining operations and arms shipments. His deception was discovered and had to pay a huge amount of money back to the charity he took it from. I don't know if what Pat said amounts to an apology, or more deception. Of course, supporting Charles Taylor was a big mistake for Pat. And so was supporting Mobutu Sese Seko, another cruel dictator. And George W. Bush.

- It is a mistake to politicise abortion for the purpose of electing Republicans. Wealthy Republicans have no trouble hypocritically denying abortion to others who can't afford to go overseas. Democrats are honestly admitting that in some cases abortion should be paid for by the Government. Nobody wants unlimited free abortions at any stage, for any reason at all, to say that about Democrats is just propaganda.

- It is a mistake to say President Obama is undermining Christianity and persecuting Christians.

- It is a mistake to continue attacking homosexuals as sinners.

- To me the most glaring of all is the "mistake" of twisting Jesus' teachings to suit ones own selfish purpose. It is a mistake to say Jesus' peaceful teachings apply only to "others", or don't apply at all any more. (*)

Some of these mistakes are in the past, some ongoing. Many are a result of sheer obstinacy, racism, ignorance, greed, lust for power or wealth, resentment of the civil rights movement of the sixties. How bad does it have to get before the fundamentalists start looking for a better system (or actually any system) of setting an enlightened church agenda?